The FY 2019–FY 2024 Strategic Plan is the City of Chubbuck’s first strategic plan. The Plan was created through gathering community input through questionnaires, obtaining input from all City Departments, and having discussions with the City’s elected officials. The result is a vision, key performance metrics to achieve by 2024, and identification of actionable opportunities to bring the Plan to fruition. While not a binding policy document, this Plan provides a roadmap to achieving the community’s goals in consideration of the City’s resource constraints.

The Strategic Plan is intended to be a living document, reviewed annually by the City prior to budget presentations to identify emerging strengths, weaknesses, opportunities, and threats, and to have its action items amended as needed to add or remove projects crucial to accomplishing its key performance metrics. As part of the budgeting process and/or in other program shifts, City department heads should identify how their requests will further the goals and vision of this plan.

Action items in the Plan are assigned to specific department heads (or division managers). The intent of this plan is that the action items are effectuated by identified department personnel and/or through coordination boards/commissions which are administered by department heads (e.g., Public Works Director, as Executive Director of the Chubbuck Development Authority (CDA), works with the CDA to fulfill a specific action item; the Planning & Development Director works with the Land Use & Development Commission to fulfill a specific action item). 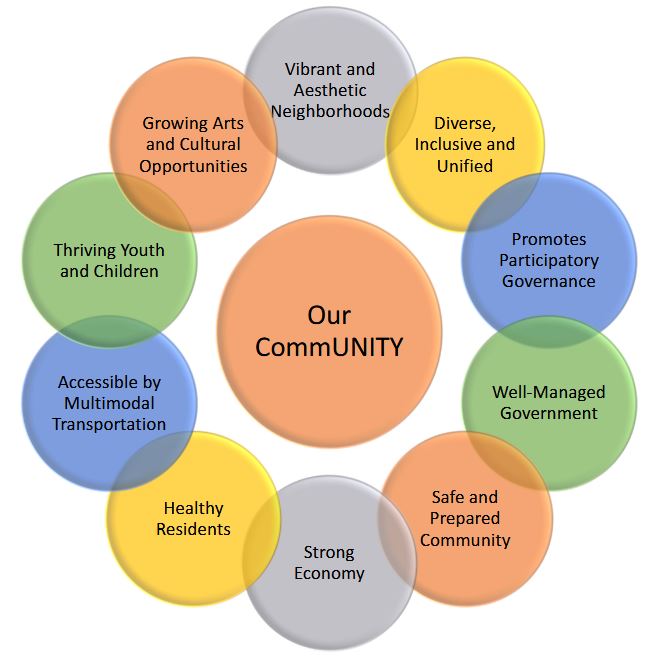 Our CommUNITY: A great place to live, work, & raise a family

In 2024, the City of Chubbuck is a family-oriented community by being:*

* Unless otherwise indicated, no list within this document is intended to be in order of importance.

In 2024, Chubbuck maintains its small town feel despite rapid growth and its neighborhoods have distinct characteristics that set them apart from other neighborhoods in the city and which set the city apart from other cities in the region. The City has ensured that development projects are compatible with, and enhance, the rest of Chubbuck, has ensured that development standards are implemented which facilitate excellent public spaces,and has taken proactive measures to address blighted or otherwise rundown properties and structures.

In 2024, Chubbuck is a caring, kind, compassionate, fair and equitable community that supports an affordable and livable community to all, regardless of age, sex, race, religious belief, ability, or otherwise.

In 2024, the City of Chubbuck actively seeks opportunities for involvement of its residents in all aspects of governance and in City programs. Residentinput is actively sought from all demographics within the community.

In 2024, the City of Chubbuck provides effective, efficient, and economical services that are responsive to the community’s needs. City government is fair and equitable while being accountable, transparent, and backed by quality and responsive staff.

In 2024, the City of Chubbuck’s residents, visitors, and workers feel safe at all hours. Emergency responders are timely, well-trained, courteous, and professional. The City is resilient and prepared for emergencies and risks.

In 2024, the City of Chubbuck is a business destination and center of innovation. New businesses are complimentary to the characteristics of the city and mixed use development is beginning to develop around arterial roads. The City is attractive to new workers as a live, work, play community.

In 2024, the City of Chubbuck has taken steps to ensure that residents have equal and ready access to opportunities that promote mental and physical well-being, and a happy, active lifestyle. The City has taken steps to draw more healthcare-oriented businesses to the area and has worked with Bannock County to address emergency medical services within the city.

In 2024, the City of Chubbuck ensures that all modes of transportation areconsidered as the City grows and as construction projects are planned. Walking and biking corridors have been established and have enhanced the ability for all residents to access shopping, employment, and recreation withoutneeding to rely on a motor vehicle.

In 2024, the City of Chubbuck ensures that needs of emerging generations are met. The City works with School District #25 regularly and works with other stakeholders to promote after-school programs. Youth in Chubbuck feel welcome and are given opportunities to recreate in the community.

In 2024, the City of Chubbuck has public places throughout the community with public art and that are programmable and programmed with performances, concerts, and activities. Art and cultural opportunities are accessible to residents of all ages and abilities.

The questionnaire occurred in 2 formats, one being digital in which a SurveyMonkey link was published on the City’s social media accountsandMayor’s vlog, provided by the Highland High School Principal to students, and linked in the Mayor’s December quarterly newsletter and the second formbeing paper surveys which were mailed to randomly selected households within the City of Chubbuck. Randomly selected households were determined using mailing info received on November 14, 2018 from the City of Chubbuck’s utility billing database under the City Clerk. Responses were incentivized through a drawing for 5 $25.00 gift cards to an area restaurant through the Pocatello-Chubbuck Chamber of Commerce.

The database contained 4,367 billing addresses and was converted from .txt format to Excel format. Duplicate names were removed from the database using the “Remove Duplicate” data tool in Excel leaving 4,047 unique names, and the list was randomized using the “RANDBETWEEN” function. With the list randomized, the first 600 names were selected. Finally, businesses were removed from the list to create a list of 543 random survey recipients. Paper surveys were distributed along with postage paid return envelopes via the Highland High School Honor Society and a local church youth group.

The Questionnaire for the Strategic Plan received 409 responses with 332 of the responses coming from respondents who indicated that they reside in the City of Chubbuck. At a 95% confidence level, using 2016 ACS 5-Year estimates that the City of Chubbuck has 14,644 residents, responses for those who so indicated that they reside in the City have a confidence interval of +/-5.4%. Survey results for Chubbuck residents and non-Chubbuck residents are includedasappendices to this Plan(malicious comments redacted).